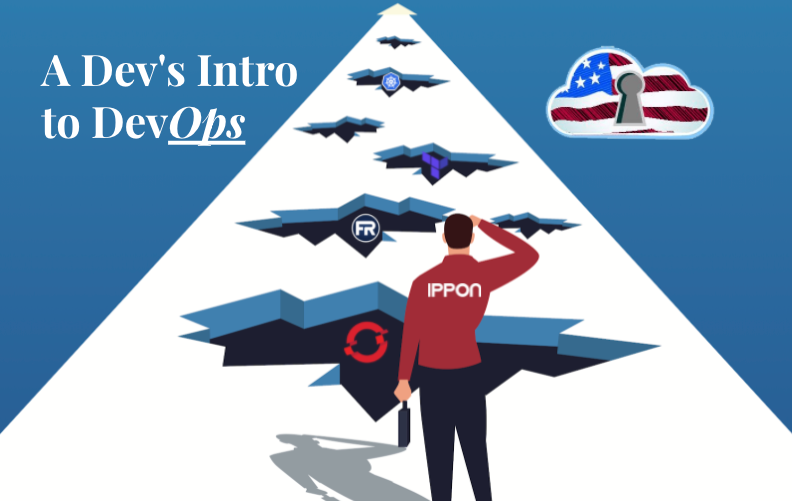 A Dev's Intro to DevOps

I have recently been sucked into the field known as DevOps and I thought it would be fun to share my story. Having spent most of my career in application development, I am curious to see if others have had a similar experience to mine.

The project started with a web application that was running on OKD (open source OpenShift) with many open-source libraries. The objective was to deploy this application in the AWS GovCloud with FedRAMP High compliance. This required a lot of work. We had to move to several commercial products versus open source (i.e. OpenShift) and move to AWS native services wherever possible.

The challenge here definitely hit me like a freight train. The first one was to set up the network. My first thought was, “What? The network was always already there when I did my work. We have to set this up?” I am being a bit facetious, but I am used to worrying much more about my application architecture than network architecture. Luckily, I was on an effective team with talented engineers ready to build the network.

As you might expect, there are many different tools out there to enable Infrastructure as Code (IaC). I relied on my teammates to make selections based on their experience. The primary tools we used were Terraform, Packer, and Ansible. I have written applications in a variety of languages so learning these “languages” should be no sweat, right? Well, these tools and languages reminded me more of elaborate configuration files than a programming language. I hope you like YAML, because it is everywhere in IaC.

Working on infrastructure can lead to an interesting problem that I never really experienced in application development. As far back as I can remember, we were using version control to manage our code and we could tag a version that would eventually end up in production. One of the first tasks when writing an enterprise application was to make sure the version could be verified in production. We did not typically have to worry about code being modified in the production environment itself.

It is much easier to modify production infrastructure using, for example, the AWS console. How tempting is it to tweak a security group on the console to make everything work? That leads to what we call drift. Now, the actual infrastructure is out of sync with the IaC; it requires the same discipline as application development, even if changes can be made directly.

A big revelation for me was the level of complexity involved in getting everything setup properly. If I had to name one of the biggest challenges, it would be handling all the certificates. It seemed every step of the way, we were fighting having the right certificates in the right places. For a project like this, you better have someone who knows how certificates work inside and out, or you are going to be in trouble. Of course, there were plenty of other challenges related to backups, patching, pipelines, security, and more. Be prepared to spend a lot of time learning and don’t expect to become an expert overnight.

How Does It End?

Truthfully, the project is still going. But we have conquered most of the major hurdles. Not to date myself, but I remember when DevOps was more like uploading a WAR file to WebLogic and watching it go. The field has come a long way since then and it requires a whole new set of skills and expertise to master.

Dennis Sharpe
I am a software architect with over 20 years experience leading, designing and coding software applications. I have experience in many different industries and I love craft beer and board games.
OUR COMPANY
Ippon Technologies is an international consulting firm that specializes in Agile Development, Big Data and DevOps / Cloud. Our 400+ highly skilled consultants are located in the US, France, Australia and Russia. Ippon technologies has a $42 million revenue.
USA Website LinkedIn
Previous Post

Taking Learning Outside of the Classroom and Into the Cloud