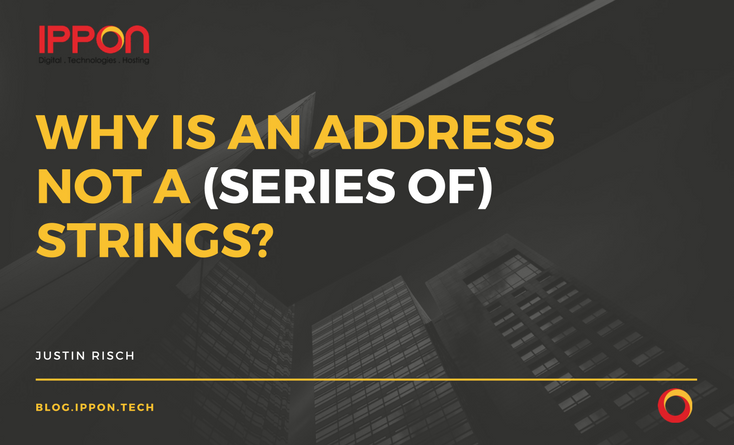 Why is an Address NOT a (series of) Strings?

In my article Why an Address is NOT a String, we discussed the complexity added when you store your address as a single string. Since then, I've discovered another, slightly worse way of storing addresses: As a series of strings.

When you store an address as a single field, you can assume some information about it -- for example, that it's a correctly formatted mailing address. You can usually send it, as is, to Google API to get a response and look up more information about it (such as the increasingly useful geolocation of the address).

And so enters the other way of doing it -- several strings. In our "Location" table, we have the following string fields: Address, Address2, Address3, City, Zip, and StreetNumber. Let's begin down this rabbit hole by discussing what each field represents.

City and Zip are properly named -- they represent the nearest city and the postal code of the address. StreetNumber is essentially the number portion of a street address (the '123' in '123 Baker Street'). It's a little misleading, since it's not necessarily a "Number" (it could be 2A), but at least we conceptually know what that data represents.

Address, Address2, and Address3 are a beast of their own. They represent the first, second, and third lines that one would write in the event they were sending a letter to this address. In many cases, Line 1 would be the route or street name (without the number, stored separately). The second line would be Apartment number or such. The third is extra. However, in other cases, Address represents the name of the building or person to deliver it to, forcing Address2 to become the route/street, and Address3 to become the apartment. That's just for America, though. Don't worry -- it gets worse.

In Japan, they write their addresses with the Country and Zip in the first line, going to the more specific as they get to the bottom line.

But that's only when writing in Japanese. If using Roman letters, they switch to use western conventions, meaning that in a single country, there are cases where the language used changes the validity of the output. The Address below is the same as the one above, just written in Roman letters.

And so, we began integrating with Google Maps API to try to standardize the fields as much as we could. Rather than the vaguely defined "Address, Address2, Address3," we have put into place new fields: Route, Administrative Level (1 through 5), Locality, Sublocality (1 through 5), and so on.

The end result? Roughly 20 fields from the JSON that Google Maps API returns, the majority of which are never used except in extremely rare cases. This means that the UI displaying this table is large, and some of the fields are not very user friendly (Administrative Level 1 doesn't mean much to the average user, when it simply means "state" in the US or "district" in many other countries -- the first level of government under "country").

How could this have possibly been avoided?

If something in this article piqued your interest and you would like more information on the services we offer at Ippon USA, we’d love to hear from you! Please contact us at contact@ippon.fr with your questions and inquiries.

Introduction to the MongoDB connector for Apache Spark