The release of Docker 1.11 is the first time that the Docker Engine is compliant with the OCI specification.

What is OCI?
The Open Container Initiative (OCI) is an open governance project for the purpose of creating open industry standards around container formats and runtime. Container technologies have seen rapid growth over the last couple years and an open standard is needed to allow portability of containers across different vendors. Docker has been the de facto standard based on its overwhelming popularity, but there is a need for a more collaborative effort with the backing of a representative group of industry leaders.

The result of the OCI is the OCI specification, that defines standards around container formats and runtime. The first implementation of the specification is runc, which was contributed to open-source by Docker. Starting with Docker 1.11, the docker engine uses the runc format as the underlying technology for creating and running docker containers.

I used these commands to successfully install runc on a RHEL instance on aws.

The open container specification is defined by a file system bundle and a compliant runtime (like runC) that can consume the bundle. Now that we have runc installed, let’s create the bundle.

The bundle consists of:

To make things easy, let’s use docker to export a rootfs, then we can use the runc spec command to generate a config.json file.

Use the runc spec command to generate the config.json file:

You will now have a config .json file and a rootfs in your current directory. This file will have the OCI version in it:

Leave this container running for the next part of the tutorial.

Run sudo runc list to see the new docker container alongside your runc container. You can use sudo docker ps to compare the IDs.

You can find the runc config.json for your docker container in /var/run/docker/libcontainerd/{imageID}.

The config.js will show you the OCI version as well as the location of your rootfs which in my case (using devicemapper storage driver) is in the /var/lib/docker/devicemapper/mnt directory.

Docker is built on top of runc, but there are actually a couple more components involved. 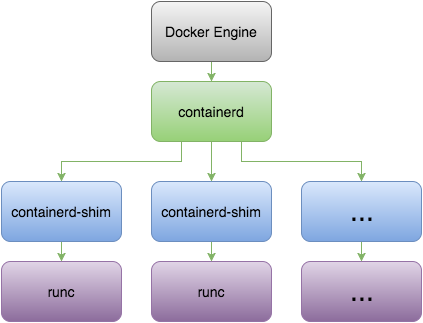 Containerd is a daemon to control runc, built for performance and density. You will find evidence of this if you run ps -ef | grep docker on your host machine.

I hope this was helpful in understanding how docker interacts with the OCI specification. Send me your thoughts on twitter @JohnZaccone.

John Zaccone
A Docker Captain and a Software Engineer at Ippon Technologies who likes getting things to market faster. Specializing in agile, microservices, containers, automation, REST, devops.
Richmond, VA LinkedIn
OUR COMPANY
Ippon Technologies is an international consulting firm that specializes in Agile Development, Big Data and DevOps / Cloud. Our 400+ highly skilled consultants are located in the US, France, Australia and Russia. Ippon technologies has a $42 million revenue.
USA Website LinkedIn
Previous Post

What is your artifact?