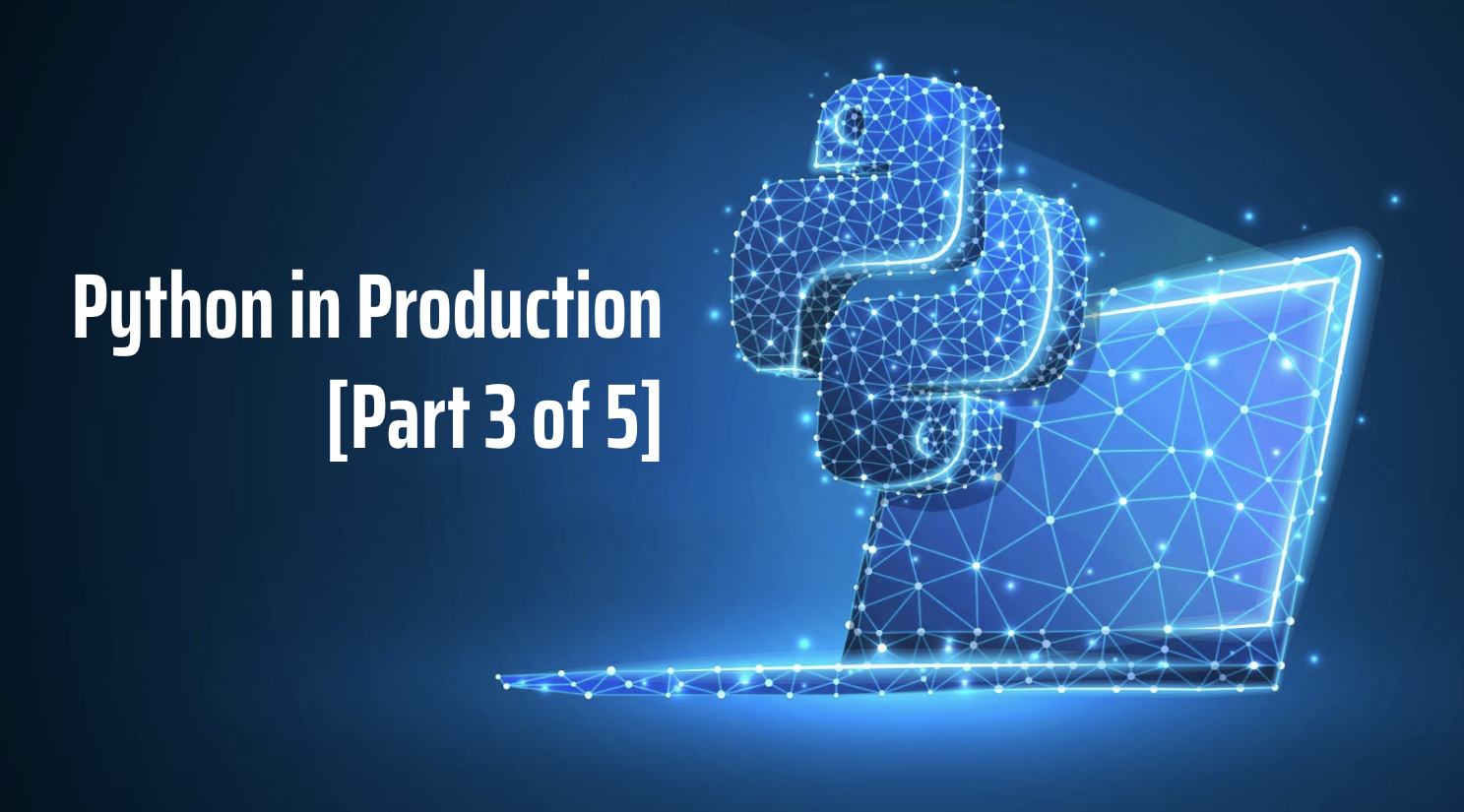 Python in Production (Part 3 of 5)

Welcome back to the Python in Production series. In the second part of the series, we learned how to create python modules and packages and why it is important to use them. We packaged our simple api program and ran it from the command line.

In part 3 of this series (this part), we will learn how to generate a single file binary executable and why doing so will aid your path to production. You will learn how, and why, to:

When is it Appropriate to Generate a Single Binary?

At this point in the series, we are ready to build our application. If you are wondering why this is necessary, continue reading and I will explain everything! If you look at this program setup through the lens of a "newly setup machine", you may come to realize, there are quite a few steps! In some scenario's it may be fine to just dockerize the whole thing. What happens though, if this application is just a part of a larger whole?

When you have a system that has many distinct parts that could be updated separately by separate people, things get a little more complicated. Imagine a scenario where there are multiple different applications running on a single board computer, say a home automation system. It doesn't make sense to rebuild every part of the system when just one part is updated, especially if the system is resource constrained. Instead, we can build that application separately, into a single binary, and then load it into the system as an "update".

Having a single binary also means that storage and versioning become easier. Building a binary locks that version of the program into a single file. This file when, stored and distributed properly, can be used to roll back updates, or test new features on old versions of your program. As far as distrubution over the web goes, it makes sense to transmit a single binary file, vs cloning and building a repo on a target device.

There are many different ways to create a single executable file from a Python program. There are managed services that can accomplish this. There are also built in tools within the Python ecosystem to accomplish this, namely; dist tools and setup tools. This Page has a wealth of information on this topic and is worth reading through.

Creating an Executable with Shiv

For our project, we are going to use a tool called shiv. Shiv piggy backs on python's "zipapps" capability and produces a single runnable binary. The great thing about this binary, is it doesn't need any other dependencies. Everything required to run the program will be included in the binary.

First, let's create a new requirements file in our project directory for pip that will include our package, as well as shiv. In the sample-python-project dir, run:

Take note of the the src/ line. This tells pip to install a local package using the relative path.

Now let's create a bash script that will handle the build process. You could just run the commands individually, but creating a build script will come in handy later when we put this process into a Jenkins Pipeline. Running the process locally using a script is also beneficial because it reduces the chance of human error.

Open up your favorite text editor and write this code to your build script.

Here is an explanation of each command.

Keeping your requirements files for pip separate makes it easy to setup your environment for development mode vs. building. This is especially true when cloning this project onto a new machine. The steps in this series are to aid in the development and release of large python projects. We use a simple example here to give you the tools to build on in the future.

A Note About Building Remotely

In a subsequent part of this series, we will put this process into a Jenkins build server. When that happens, it will be necessary to create a separate bash script for setting up the initial virtual environment (refered to as the development virtual environment above) and installing our programs dependencies, because it will not exist on a newly provisioned machine.

Congratulations! You have just created a single file, binary executable. In order to run the binary, we must go back to the terminal.

I encourage you to put this executable binary onto a different machine and run it! As long as that machine has the proper version of Python installed, the program will run.

There are a few things worth mentioning that could cause you some errors along the way, especially if your program is not pure python. If you build this binary on a machine running an ARM processor, and then copy it to a machine running an AMD processor, you may run into some issues. In a later part of the series, we will discuss building for different architectures in more depth. Remember from part 1, I mentioned that it is good to know which version of python you are building for? Well, it is also good to know which architecture you are building for too!

Some packages that are architecture specific may include things like Audio Controllers, Systemd bindings, or SPI dev kits. These packages interact with the hardware of the computer and therefore are more architecture-specific.

Update your .gitignore and Push Your Changes

Now that we are building an executable, we have lots of artifacts in our repo. For instance simple_api.egg-info is not something we want in our source control repository. There is a really awesome template .gitignore file here. This is what I will be using moving forward.

In part 4 of this series (coming soon!), we will load our binary onto a linux system and run it using systemd. We will learn how to create a systemd unit file, pipe logging to journald, and how to use an Environment File to configure our program. For more information on how Ippon Technologies can help your organization utilize Python, contact sales@ipponusa.com.

Why Companies are Moving their Applications to Modular Architecture