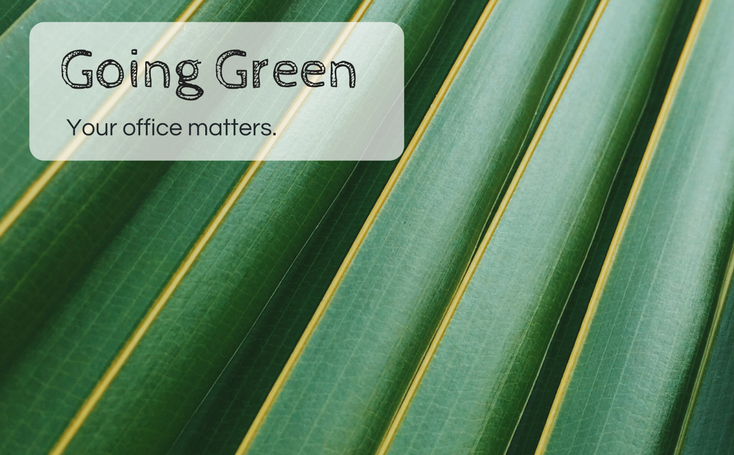 Most office-workers will spend the majority of their adult life in the office -- about 47 hours a week if you're an American. Because of this, the majority of a person's carbon footprint will happen there, assuming they don't live in a coal power plant. Without a proper kitchen, most office buildings will host parties that rely on disposable dishes, have daily coffee in paper or Styrofoam cups, and have an excessive amount of lights on all day, every day, even potentially leaving them all on until the last employee leaves late at night. Even the act of going to the office requires burning gallons of gas as hundreds of employees travel an average of 25.4 minutes to the same office building, only to sit in their separate cubicles and occasionally hand each other a paper or attend a meeting. (Here's a cool map to visualize that data)

Many of us will personally try to go green, but no one wants to make a fuss at the office about getting the company to go green as well. As such, the majority of the waste a person produces -- either in inefficiencies or literal garbage production -- will go unchecked. Here's a couple of suggestions on both how to introduce the idea, and how to implement those changes when your company decides to take action.

Beginning any request for a change in office procedures can be daunting. As an introverted person myself, I understand the difficulty in approaching coworkers to ask for something -- even if it's to help with a cause that's important, like being environmentally friendly. If approaching it alone is hard, try to gather support with people you're closest to at the office first. Pitch the idea to them to see how well the idea will be received, and ask for them to suggest ideas too.

When you have your proposal ready, ask to speak with management after hours or during lunch. A quick, informal meeting to let them know that you care about this issue and, if you did the step above, that others are interested in making the change as well. Once you're talking to someone who can get the ball rolling, here's some helpful points you can bring up:

So now you've convinced HR...what changes can be made?

No seriously, it seems extreme at first. But a brisk morning walk to your home-office is a lot better for you and the environment than sitting through traffic on the way to an office. With things like [Google Hangouts](https://hangouts.google.com/), [Skype for Business](https://www.skype.com/en/business/skype-for-business/), and good old fashioned telephones, is there really a need to be in person for much? Papers can be signed electronically, meetings can be telecommuted to, and work can be shared in real time via software like [Google Docs](https://www.google.com/docs/about/) and [Office 365](https://products.office.com/en-us/business/explore-office-365-for-business). When you can literally work on the same document at the same time, it's even better than if you were sitting together, staring over each other's shoulder as you share a keyboard. There's simply no need to be in person, unless you're building a sales reputation or working on something physical together, like a presentation.

Each worker that telecommutes will save nearly $2,600 a year in costs, or 10$ a day. With the average commute being 45 minutes, your employees will have that extra time to invest in themselves, the company, or in the communities they want to contribute to, rather than being stuck behind the wheel. Let's be honest, people hate traffic. Ranking number 4 on a list of 50 things people hate most -- it comes right between slow WiFi and people who take up two parking spaces. Would you rather your employees start that important project with 30 minutes of extra rest in the morning, or 30 minutes of rage-inducing, pollution-filled traffic?

It may be a bit of a struggle convincing your company to adopt a no-commute policy. Despite the evidence that working from [home makes people 13% more productive](https://hbr.org/2014/01/to-raise-productivity-let-more-employees-work-from-home), many people believe that people are less productive working in the comfort of their home, or that they will be lazy without a big-brother watching over them. That's because, for a long time, not being in the office meant working was impossible -- and thus you *were* being lazy. Though that's an outdated mindset thanks to the advance of technology, it still permeates our work culture.

If a no-commute policy which allows people to come in as-needed is too far of a reach, try building trust in your coworkers and the policy. Suggest a day of the week in which everyone telecommutes, or allow a certain number of days a week in which anyone is allowed to work from home, if a particular day of the week is too rigid for the needs of your office. I suggest Work-From-Home Wednesday -- giving people an easy day in the middle of their week, to help them cut into their backlogs while simultaneously resting up for the rest of their week! After some time, maybe expand it to two or even three days a week, as you test the waters to see how compatible working from home is with your company's needs.

The first step is which cup you grab -- is it disposable? If so, you could consider switching to a reusable thermos or mug. If that's not an option, perhaps you have no way to rinse it at the office or simply forgot yours that day -- try to use paper cups over Styrofoam cups. Additionally, make that your one cup of the day, and reuse it!

Get Rid of K-Cups.

Though you may not know the name John Sylvan, you've probably heard of his invention, the Keurig Coffee Machine -- more specifically, the K-Cup. If your office uses one of these in either its actual office or in its lobby, you should really consider an alternative. [John Sylvan himself would recommend it](http://www.businessinsider.com/k-cup-inventor-john-sylvans-regret-2015-3). That's because [9 billion K-Cups were sold last year](https://www.theatlantic.com/technology/archive/2015/03/the-abominable-k-cup-coffee-pod-environment-problem/386501/), and if you read the article about Sylvan's regrets, you would know that these 9 billion cups are completely un-recyclable. If you're able to, I'd personally recommend just going with the usual coffee pot. It's a solid solution with very little waste in an office of six or more sharing it.

Suppose your office is smaller, doesn't have many coffee drinkers, or has a lobby which offers free coffee to patrons. You probably won't want to make a whole pot then, which would be wasteful as well. Try using K-Cup brands that use less plastic -- like the San Fransico Brand OneCup. It also comes in a compostable bag, rather than a laminated box. At 26-34 cents a cup, the OneCup is often cheaper than competitors as well!

Lights that turn off automatically when no one is in the room are cool and energy efficient, but with a smaller investment, you could also save money on your power bill buy switching to LED Bulbs! Being that these last longer and can save you [hundreds in your power bill over time](http://inhabitat.com/7-eco-friendly-tips-to-green-your-bathroom/), those are rewarding switch to make.

They are [non-recycleable](http://earth911.com/home-garden/what-not-to-put-in-the-bin/). They work decently well in a [compost](https://alumni.stanford.edu/get/page/magazine/article/?article_id=29080), but assuming your company doesn't have one available, there are alternatives available. Here's an at-length [article](http://www.thekitchn.com/inspiration-how-to-go-paper-to-79747) on the subject!

Use refillable Containers for Soap, etc.

This lets you buy bulk-sized containers and save money as well!

Check What Your Disposables Are Made Of.

If it isn't recyclable, switch brands!

The sink, the toilet, and any showers available should be installed with low-flow faucets and such to limit water usage. That includes motion-sensor faucets!

Go Outside and Pick Something Up.

If you really want to make a difference, try setting up a one time or even monthly event where, as a team building exercise, you clean up a local landmark. Our company, Ippon Technologies, has cleaned up the James River adjacent to our office several times, and has made efforts in the area to encourage other companies to do the same.

Share tips with your friends, coworkers, and family. Feel free to share this article, or any of the many I link to, and get the conversation started. We can make a real change, but only if people understand how much the environment, workers, and companies have to gain by making these changes.
Share this article:

Insure Your Digital Strategy with 2020 Vision